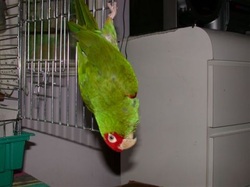 Elmo
This is Elmo, our little Cherry Head Conure. He lasted 3 weeks with his previous owner who adopted him from a couple who were getting divorced. She couldn't clean or put her hand in the cage because every time she did Elmo would bite her. She, of course, would pull her hand back letting Elmo know she was not only afraid of him but that he was the boss. I happened to be doing a service call at her house one day and she asked me if I wanted "this nasty bird that always bites her"? I said "sure that's what we do".

So Elmo came to live with us . He was fully flighted and in a very small cage so we had to clip his wings right away. I put my hand into his cage and, true to course, he tested me also by lunging for me. I did not move my hand and took the bite.

Compared to being bitten by a Macaw it wasn't bad, but Elmo's little beak is sharp and strong. Now that the test is done and Elmo knows I'm not afraid of him he comes up on my hand, sits there, and mimics me as I speak. We all got a great laugh from that. What happened to this guy that was supposed to be so nasty? My daughter Tiffani and I clipped his wings simply by holding up his wings one at a time. We didn't even have to restrain him. Elmo is quite a character and has really gotten attached to Tiffani. He stays with her in her room right by the window with lots of toys and a great view to keep him occupied while she is at school . He is quite the comedian and many times sits with us at the dinner table, on her shoulder, saying "Want some! Want some!". What both previous owners lost is certainly our gain. We all love him very much and he certainly makes our life happier. I sure hope we have done the same for him. Elmo still tests you when you put your hand in for him but he doesn't bite hard. I guess he has to play the game to keep us guessing. 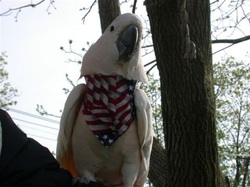 Barney
This is Barney, our Molucan Cockatoo, at the Hampton Classics. Barney is our most popular Cockatoo. He is about 14 years old and is in incredibly great shape according to Mark Marrone of TV fame.

We adopted him from a young lady that had gotten divorced and remarried and Barney was not liked by his owners second husband. Our impression was that he was a very neat person and everything had to be kept "just so" around the house. This is where the problems began.

COCKATOOS CREATE DUST!!!! They have a special dust gland that produces dust in addition to the dust they create just from being a bird.  So Barney was relegated to the basement for a few years. Right next to the sewer pipe in a Plexiglas enclosure with his own air filtering system. All locked up, "neat and tidy", so he couldn't create a mess anywhere in the house.

When he finally started biting his owner, who had hand raised him, she then knew it was time to find him another home. She went through several interviews with different people and after stopping by our house to inspect, she let us adopt him. I give her that much credit, that at least she cared what kind of home he went to.

It took us around 4 months to even get Barney to come out of his cage, but once he did and he saw the attention he would get it was all over. He loves everyone and wants to be caressed as much as possible. Everyone knows when Barney is around because he shouts "MOVE OUT, MOVE OUT!" in a very loud voice that can be heard a block away. I guess that's because his previous owner told him that more than once. Barney is one of the birds that likes me best. I can pick him up and give him kisses and hugs and he loves it and so do I. He always talks in a sweet voice and says "Hello",  "I Love You",  and "Hi Barney" unless he is shouting "MOVE OUT!" then it is deafening. Barney comes with us on every out-reach we do and he will have a home at the Priceless Parrot Preserve for the rest of his life. He is a very special bird to me. 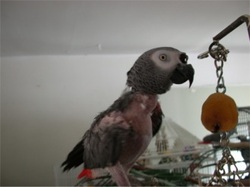 This is Charlie, another African Grey that we took in a few months back. This must have been a year for African Greys. We got calls for advice on so many and also calls to take them in. Charlie was misnamed, as Charlie is a girl, but nowadays it can go both ways. She was given to her last caregiver around 25 years ago. We were told she was not a baby at the time they received her, so they were not sure of her age. Poor Charlie came to us this way, plucked with feather follicles destroyed so the feathers won't ever grow back and a large gaping hole where her nostrils used to be. This is the end result of a tumor that started 15 years ago when avian medicine was new and vets didn't know much about them. We usually ask the former caregivers to write some sort of epitaph for their pets when they can or when they remember so we can put it up on our site. The following is a note from Charlie's former caregiver.

This is Charlie. She is an African Grey Parrot. She was given to my family about 25 years ago as a gift. She was wild caught from Nigeria. She was not a baby at the time we received her so we are not sure of her age. After we had her for about 8 years, she began to pluck her feathers. The Vets and the pet shop owners always told us that African Greys are nervous birds and that there was nothing much you could do about her plucking.  After we had her for 10 years she started laying eggs. Up until that point we had thought that Charlie was a male. About 15 years ago, a growth formed on Charlie's beak. The vet didn't think there was anything he could do to remove it . My Grandmother, not being satisfied with that answer, took matters into her own hands. I'm not sure what she used, but she mixed up an ointment that stopped the growth but has left Charlie with a large hole where her nostrils would be. It took up about half the top of her beak.

Through the years, my family has fed Charlie mostly sunflower seeds and peanuts. I have recently learned that this is not a nutritious diet for her. We did give her fruit (usually apples and grapes) as well but mostly as a snack.

We often leave Charlie's cage open, so that she can wander around it. Even though not clipped she has never flown in our house. She is not social with anyone and has bitten anyone that goes near her for as long as I can remember.

Thank you for taking Charlie. We know now that we have not given her the best life nor the healthiest, but I feel happy knowing that she will be in a loving environment with other parrots of her kind. Gene and Marietta  at the Priceless Parrot Preserve really do care only for what is best for the birds. They would not take any money from us when we brought Charlie to them nor did they want us to make monthly donations. However we will  leave them something and donate when ever we can. Thank you so much for taking Charlie.

This is why we say do your research before you buy  or adopt a bird. Charlie's tumor did start to become active again which we contributed to the stress of the move. However, we moved her location to a different area with the rest of the Greys and it dried up and stopped. Charlie who never went to anyone will now comes over to me, gives me a kiss on my lips, lets me scratch her head, lets me stroke her on the back and is almost stepping up on my hand. I believe she is happy now and is just the sweetest thing. She jumps around the cages with the other African Greys and they all have a good time.  I certainly would not ever give her up now that she's been with us for awhile, but then I feel that way about all our flock no matter what they look like. We certainly did change the world for this little bird.